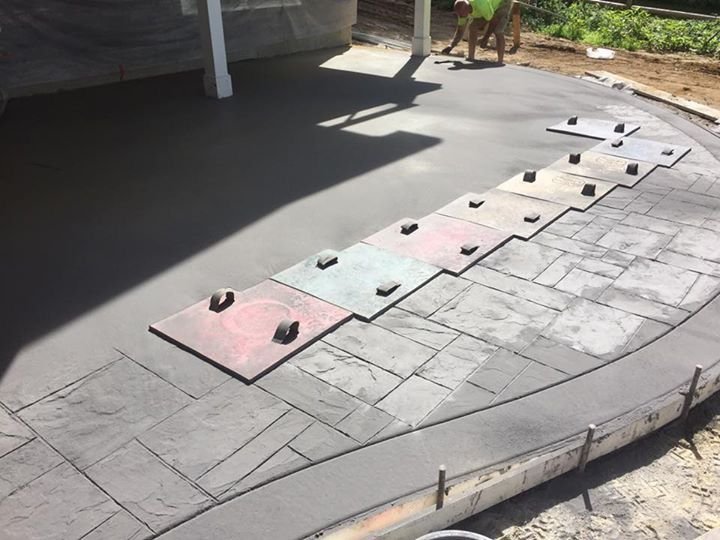 The use of release Antique release agent for stamped concrete project is like casting character actors into a film. They don’t play a starring role, but they are essential to the development of good plots.

Pigmented powder or liquid release agents actually play two roles in a stamped concrete project: they act as bond breakers to prevent the stamping of mats and skins from sticking to the concrete and disturbing the texture of the imprint, and they impart a subtle color to the concrete that enhances the integral or dry-shake color, resulting in an antiquity effect.

Powdered release agents are more traditionally used by stamping contractors because they offer more color choices. However, there are a few drawbacks.

Because they are dusted on the concrete surface, fine airborne dust particles are produced, so workers must wear dust masks to prevent inhalation.

And on windy days, the airborne powder can stain nearby buildings, existing concrete flooring, and landscaping, making it necessary to mask adjacent areas with plastic or paper sheeting.

Many contractors use clear liquid release agents to eliminate these problems and tint them with a powdered release.

The majority of manufacturers package powdered release agents in 30-pound pails. Usually, 30 pounds is sufficient to cover an area of around 1,000 square feet (or an application rate of 3 pounds per 100 square feet).

The easiest way to apply the release is with a dry tampico brush 8 inches wide.

Dip the brush into the release pail and fluff it in order to load the bristles and coat them evenly. Then take the brush by the handle, keep it below the level of the belt, and use your wrist to flick the release to the surface in a clean, uniform sheet.

Avoid applying too much release agent because it might interfere with pattern imprinting, particularly lighter textures. Sometimes, once the concrete has been painted and sealed, it can be very difficult to remove the release powder if the color is too deep.

When applying a powdered release, try not to operate more than a few rows ahead of the stamped side. In windy conditions, any loose release on the surface could blow away.

Therefore, the release agent can begin to absorb water from the concrete surface, causing it to dry out too quickly.

When you start stamping the areas where the release powder has been applied, look for lighting in the release color to help determine if you have completely depressed the stamp.

Irrespective of the color you choose, the release will lighten when the stamp is completely compacted. You Get get Antique Release Agent for stamped Concrete products here

Use a pump-type sprayer to add a uniform coat of liquid release to the surface of the concrete right before stamping.

If you are planning to use a tinted liquid release, apply the tint a day or two before, if possible, to allow the pigment particles to dissolve completely.

Right before you pour the release into the pump sprayer for use, stir well to mix in any release powder that may have settled down to the bottom of the bucket so that you don’t have splotchy areas and a non-uniform color.

You can also strain the tinted release using cheesecloth or a strainer to remove any clumps of pigment. When you apply the release, make sure to shake the sprayer to keep the contents agitated so that the pigment does not have a chance to settle.

How to build color accents When using release agents to create accent color on a stamped concrete project, a common technique is to start with a light concrete base color (whether an integral color or a color hardener) and then add a much darker release agent for contrast.

Although about 70 to 80 percent of the release is washed away after the hardening of the concrete, the remaining release is compressed into the surface paste during the stamping process, which produces subtle color accents.

Apply a very small amount of powdered release to the surface of the concrete to achieve a random antiquing effect and then spray the liquid over the top of it.

The liquid dissolves the light layer of powder so that the surface is painted with slight accents.

When you turn to another release color, be sure to clean the stamp mats between uses.

For example, if you use a dark brown release on one job and then, a few days later, use the same stamps on another job with a light carbon release, the dark brown can contaminate the color of charcoal if you do not clean the mats thoroughly first.

Even if you use the same release color from day to day, it’s important to clean the mats if you see a layer of paste buildup that could affect the imprint quality.

Check how contractors have combined stamped concrete color hardeners and release agents to create a variety of dark and light color schemes.